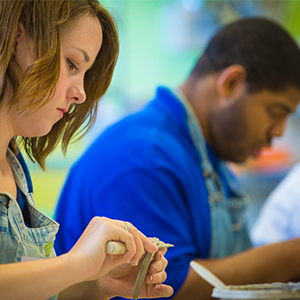 July 27, 2015   ArtMix uses art to resculpt lives of people with disabilities. Emily loves throwing clay. That is, the process of using a pottery wheel to form a ball of clay into beautiful pottery—and her pottery is beautiful. Bright colors and bowls of all sizes make her pottery memorable, but then, so is her story. Emily […]Read More.

July 22, 2015   Be like George. Be in. When architect Alexander Ralston designed the original mile square plat for Indianapolis, he neglected to include parks. As Indy’s population exploded in the late 19th century, the lack of parks became a glaring deficiency. So city officials embarked on a plan to implement a citywide park system, but politics […]Read More.