Be IN: Gustave Efroymson 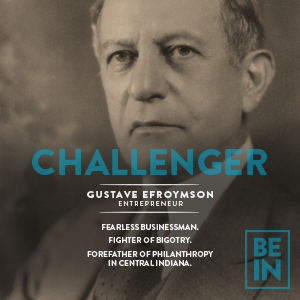 Because he was a modest man, it is not widely known that one of Central Indiana’s most brilliant businessmen and philanthropists was also a seasoned campaigner against injustice. Gustave Efroymson was a pillar of the Jewish community, the owner of two downtown department stores, and president of the Real Silk Company. He also took on loan sharking, and the Klan, and got the better of both of them.

Efroymson advocated against predatory lenders and the degradation of door-to-door begging. In his view, it did little but consign the poor of Central Indiana to perpetual charity. In 1912, he helped to form the Indianapolis Public Welfare Loan Association, which provided small loans aimed at creating a more self-reliant Central Indiana populace. He also helped pass laws limiting interest rates on such loans.

In 1923 the Wasson Credit Union, Indiana’s first, opened for business, due in large part to Efroymson’s advocacy. And when he joined other business and civic leaders to form The Indianapolis Foundation, he helped to create one of the nation’s earliest community foundations, to respond in perpetuity to the city’s changing needs.

He also led a challenge to yet another menace to Hoosier prosperity—the Ku Klux Klan—helping to organize a group of Jewish and Catholic merchants to resist the Klan’s growing influence in Hoosier politics.

Central Indiana in the 21st century is a brighter place because of Gustave Efroymson, but we know it can be even better. What change will you bring? Make a difference for your Central Indiana neighbors. Be IN—today, and for the century to come.

What does it mean to BE IN?

It’s a milestone year—the ideal time for the community to come together and Be IN. 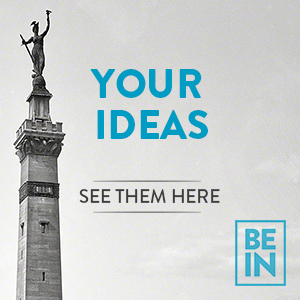 Click the image above to view the submissions from other visionaries.

All it takes is one idea?

Do you have a vision for our community’s future? A big idea that can make life better for Central Indiana citizens? That can make our city more vibrant and beautiful? That can help attract and retain creative talent? That will build on the foundation laid by Central Indiana’s visionaries from a century ago? If so, we want to hear it.

You can upload a brief 15 to 30 second video sharing your vision, or submit a written version of your vision here.

Over the next several months, CICF will review and evaluate all submissions. The best ones will be displayed on this website this fall. Some may even become eligible for funding from CICF.

Now is the time to lay the foundation for the next 100 years. To be inspired. To be involved. To be IN.