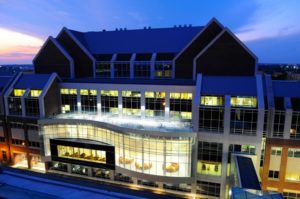 Walther Hall, located on the IUPUI campus, is Indiana University’s largest research building and is home to most of the cancer center’s researchers.

INDIANAPOLIS – The Rachel Cecile Efroymson endowed chair has been established at the Indiana University Melvin and Bren Simon Cancer Center with a $2 million gift from the Efroymson Family Fund.

“I am deeply inspired by Lori and her family. Our relationship with them began because of a disease that took two lives, far too soon. What it did not take away from this extraordinary family is the passion to make a difference for others. Through their generosity, the names of Rachel and Dan Efroymson will remain a constant reminder to our researchers — not for what cancer did to them — but rather as a charge for what we must do to relieve the burden of cancer for other families,” said Patrick J. Loehrer Sr., M.D., director of the IU Simon Cancer Center.

Jiali Han, Ph.D., an internationally recognized cancer researcher who links genes for diseases with their environmental triggers has been named the Rachel Cecile Efroymson Chair in Cancer Research. Dr. Han also has been named professor and inaugural chair of the Department of Epidemiology at the new Fairbanks School of Public Health at Indiana University – Purdue University Indianapolis.

“I’m grateful that the Efroymson Family Fund is a partner in our mission to decrease cancer rates in Indiana with public health strategies and to increase opportunities for physicians to educate their patients about personal genetic risk factors,” Dr. Han said.

Dr. Han’s role is to reveal the genetic traits that trigger disease when exposed to certain behaviors and then translate that knowledge into public policy and individual prevention strategies. His research involves comparing the genes of those who are exposed to environmental risks and get cancer with those who have the same environmental exposure but remain cancer free.

“We can’t change the genes that trigger disease, but educating about individual risk can lead to behavior modification,” Dr. Han said. His goal is to collaborate with physicians to provide patients with personalized prevention programs.

Dr. Han is widely known for his skin cancer research. For example, he has demonstrated a link between tanning bed exposure and increased risk of basal cell carcinoma, the most common form of skin cancer. He has also published studies that indicate caffeinated coffee consumption lowers the risk of developing this specific skin cancer. Most recently, he has shown that those with a personal history of prostate cancer also have a greater chance of developing melanoma, the most deadly type of skin cancer. As chairman of the Department of Epidemiology at the Fairbanks School of Public Health, Dr. Han intends to recruit three more faculty members specializing in cancer epidemiology to join three current faculty members. Dr. Han will also serve as co-leader of the IU Simon Cancer Center’s cancer prevention and control research program. Nearly 40 researchers in the program are engaged in innovative and collaborative research, with the potential to decrease cancer morbidity and mortality.

“Dr. Han is the right man at the right time for the Fairbanks School of Public Health and the IU Simon Cancer,” Dr. Loehrer said. “He brings experience, enthusiasm and leadership to the burgeoning field of molecular epidemiology and cancer. Only through the understanding of the many intricacies of the causes of cancer can we hope to make meaningful and sustainable impacts in patients’ lives.”

Currently, Dr. Han leads collaborative studies that compare DNA markers across the genome — the complete genetic material in a person — in people with a disease or trait to people without the disease or trait by using bioinformatics and molecular biology tools to examine the association and the biological function of genetic variants. He has also worked on breast and lung cancers and endometriosis.

Dr. Han serves as a key investigator on multiple National Institutes of Health-funded projects, providing critical expertise in genetic and molecular epidemiology to other faculty members and researchers. He has been the principal investigator on a number of NIH grants, and he has published more than 100 original research articles in peer-reviewed journals.

He has been invited to speak about his research at regional, national and international scientific meetings. He is an associate editor for the journal Cancer Causes and Control and serves on the editorial board of Experimental Dermatology, and he has been a guest associate editor of PLoS Genetics. He has served on a number of national and international committees and chaired sessions of national scientific societies.

“This is a very rare opportunity,” Dr. Han said of his decision to come to Indiana University. “It’s an opportunity to build a new school and a new department. It’s very exciting to collaborate with outstanding physicians and scientists at IU who are doing extraordinary translational research.”

The IU Simon Cancer Center is currently conducting a national search for a faculty member to hold the Daniel and Lori Efroymson Chair in Cancer Research.

About the Efroymson Family Fund