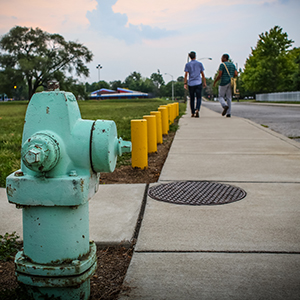 INDIANAPOLIS, IN (June 30, 2015) – The lack of a high school diploma, insufficient job opportunities and a need for data-driven public safety strategies are threats to public safety in Indianapolis according to The Importance of Community, a report released today by The Indianapolis Foundation.

An affiliate of Central Indiana Community Foundation, The Indianapolis Foundation was selected by the City-County Council of Marion County and Indianapolis in 2013 to administer the $2 million annual Marion City-County Community Crime Prevention Grant Program. The Importance of Community was created to help the grant program better serve the City of Indianapolis and its residents by identifying key causes and potential solutions for improving public safety in Indianapolis. The report also contains an outcome summary for the Community Crime Prevention Grant Program from 2013-2014.

“The Indianapolis Foundation has helped donors make transformative grants based upon research, community knowledge and a commitment to supporting effective not-for-profits since 1916,” said Brian Payne, President and CEO, Indianapolis Foundation and CICF. “We are proud of our work supporting the City of Indianapolis and our community’s residents to improve public safety and will use the data collected in this report to better inform our efforts administering the Community Crime Prevention Grant Program.”

CICF donors have also contributed an additional $287,500 toward public safety-focused programs and not-for-profits, Payne said. CICF created a privately-funded College Readiness and Success Initiative in 2008 emphasizing a post-secondary degree attainment, and is also incorporating a greater focus on high school diploma attainment as a result of the report’s findings.

“On behalf of the Department of Public Safety and all of those who strive to make Indianapolis safer, I am grateful that The Indianapolis Foundation and CICF have created and released this comprehensive crime prevention report, one of the most thorough reviews that has been completed,” said Troy Riggs, Director of Public Safety, City of Indianapolis. “This report clearly demonstrates CICF’s commitment to being both a good steward of public resources and a critical community partner for improving the quality of life of Indianapolis residents.”

Riggs noted that, as recommended in the report, “Our greatest opportunity to achieve lower, sustainable crime rates is to use data to inform our strategies, work collaboratively as a community, and vigorously address quality of life issues that are root causes of crime.” According to Riggs, as of June 22, 2015, homicides in Indianapolis had decreased by 40 percent in the past six months, and that shootings had also declined in 2013 and 2014.

A complete copy of the report can be seen here.

In August 2006, the Community Crime Prevention Task Force was convened to study the root causes of crime in the community, determine the types of programs most likely to prevent crime or effectively intervene in the lives of those at risk of criminal behavior, and make recommendations about how the community could prevent crime in the future. The task force examined the underlying problems that led to a surge in violent crime in Indianapolis and in 2007 recommended actions to stem the violence and to prevent crime before it occurs.

In July 2007, the City-County Council passed Proposal No. 264 to increase the County Option Income Tax (COIT) and establish the Community Crime Prevention Grant Program to provide funding for crime prevention initiatives recommended by the Task Force its January 2007 final report. In June 2012, the Community Crime Prevention Grant Program awarded over $1.8M to 18 organizations that specifically provided support to youth programs and to programs that helped previously incarcerated individuals back in to jobs and back in to the community.

Since being named the administrator of the Community Crime Prevention Grant Program in April 2013, The Indianapolis Foundation has worked to create a process that is transparent and holistic in its approach of administering public resources to achieve the greatest public impact. This work included a “listening tour” with many of the city’s criminal justice system leaders and non-profit organizations that provide related and/or associated crime prevention services. The Foundation will continue to solicit input from community leaders and residents to help develop strategies that address both the symptoms and root causes of crime in Indianapolis and Marion County.