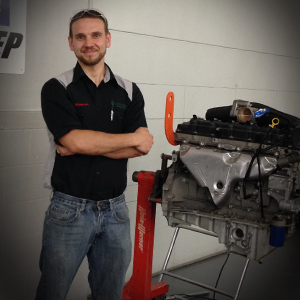 “People who work on cars need to be able to work their mind, work a wrench, and run through something while getting their hands dirty,” says Smith, who says he’d rather work a wrench than sit at a desk. He adds, “I walk in the (GM dealership) sales room at work and they’re all clean with their shiny shoes. I’m dirty, greasy, bloody and smelly. It’s a thing of pride.”

Hence the scholarship name, Busted Knuckle, which is designed for students just like Smith and made possible by his late grandmother’s Personal Foundation at Central Indiana Community Foundation (CICF), of which Nathan and his family now advise.

Smith found inspiration for his scholarship when he noticed classmates working multiple jobs to pay tuition, despite Ivy Tech being one of the least expensive options for earning an associate degree. Smith hopes this scholarship will reduce financial stress and increase the likelihood of graduation and finding employment.

The Busted Knuckle scholarship is meant to encourage women to join the field, giving preference to women in their second year of the GM ASEP program with a 2.7 grade point average. Smith hopes this scholarship will eliminate any adversity females face in the industry, although busted knuckles come with the territory—male or female.

“I’m at a loss for words,” says Bruce. “It’s awesome not having to worry about financials to pay for the program… it was such a big amount to be awarded.”

He added that receiving the scholarship from one of his peers was different, but that it was neat to see what Smith had done for his classmates. Bruce graduated in August.

Even before his own graduation last year, Smith knew that he wanted to give back to GM ASEP, but it was his grandmother that made it possible. She had a significant influence on his desire to give back to his community. He says, “[She] was truly my best friend. She was everyone’s best friend… She taught me the importance of being humble, generous and kind.”

Smith and his family continue to honor the philanthropic tradition their grandmother set in motion in many ways, including this scholarship.