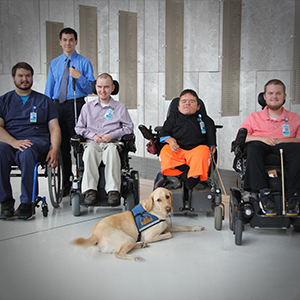 Nearly eight out of ten people with disabilities are unemployed. Eskenazi Health and Ball State University want to change that.

Like most rising college seniors, Preston Radtke hoped to spend his summer working a career-focused internship to develop his public relations skills. He knew an internship would set him apart against other job-seeking graduates. But unlike most college seniors, Radtke is visually impaired. He struggled to connect with a meaningful internship that would give him a fully integrated experience at a large organization. That was until Eskenazi Health hired him.

In 2013, in partnership with Ball State University, Eskenazi Health hired its first intern with disabilities, and in 2015 the hospital hired five such interns to work in departments directly related to their major. Radtke spent his summer interning with Todd Harper, Public Affairs Manager, while the others worked in palliative care, Eskenazi Health Foundation, computer programing and rehab. While this wasn’t Radtke’s first internship, it was a first for some of his peers.

“For any organization, having interns that are experts in the field working for you is so great,” says Harper. “The interns we’ve had have been able to give back and help us right away. That helps a lot.”

Harper says Radtke quickly became an integral part of the team by writing press releases and a proclamation for the mayor, working with media, attending meetings and conducting research for the department. In just 10 short weeks, interns get a quick glimpse into the fast-paced, ever-changing culture at Eskenazi Health.

The Americans with Disabilities Act celebrated its 25th anniversary in July, which made discrimination against people with disabilities illegal. So why is a specific program like Eskenazi Health’s internship program necessary for students with disabilities?

Preston Radtke, a college senior at Ball State University, is an intern with Eskenazi Health.

“In general, a lot of people with disabilities talk about how they don’t have the experience for a job they want to pursue,” says Radtke. “Some companies think it’s too much of an added hassle; they have to do a lot more for a disabled worker than someone else…It’s getting less and less relevant, but I think that’s still out there.”

The “do a lot more” Radtke refers to includes purchasing software for a visually impaired employee or installing automatic doors for wheelchair users—all of which can be categorized under the “reasonable accommodation” portion of the Americans with Disabilities Act because it allows a person to simply do their job. It can be a big expense and Radtke says a company may not want to take a chance on someone they aren’t sure about.

The Indianapolis Foundation supports Eskenazi Health’s internship program because even with the Americans with Disabilities Act in place, nearly 77 percent of the disabled population is unemployed, roughly nine times more than the general population, according to the 2012 census. The Eskenazi Health internship is one way of addressing that unemployment problem.

“Other organizations should look and explore to have an internship program like this,” says Harper. “There are so many disparities for people with disabilities getting jobs… It’s hard to get that work experience.”

By saying yes to these interns, Eskenazi Health has given them the foundation to be anything they want to be. For Radtke and his peers, this internship was an opportunity they knew they deserved, but because of Eskenazi Health’s internship program, now everyone knows.