An English Lesson for Everyone 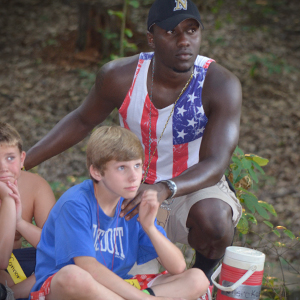 “Do you know Captain English?” asks a young camper at Englishton Park Summer Camp in Lexington, Indiana, just north of Louisville, KY. He’s an honorary lunch guest at the Captain’s table, perhaps the highest award camp offers. Legend has it that a shy, omnipresent Capt. William English roams the camp, keeping watch over the campers and rewarding them for good behavior. Of course, not many people have seen the captain; he passed away nearly 100 years ago

Preceding his death in 1926, Capt. English made a planned gift to donate 300 acres of lakes, woods and fields in Scott County to The Indianapolis Foundation with the intent of establishing a summer home for at-risk youth. In 1970, the park hosted its first Englishton Park Summer Camp, a 10-day remedial camp for children with academic and behavioral challenges, led by husband and wife, Thomas and Lisa Barnett.

Capt. English’s vision for a summer home may not have specifically include dividing children into four Native American tribes to chant in unison throughout his estate. He probably didn’t imagine them using saws and shovels to build multi-level tree forts in the woods either. But Englishton Park Summer Camp attendees experience all of this every day, for ten transformational days.

Mr. Barnett says giving kids freedom to make safe choices during activities like fort building is an important part of the experience. “We are very intentional about creating an environment where positive behavior comes out. We find out what they can do, how long they can pay attention. Then we set that as a benchmark and build on the success from there.”

When a camper meets or exceeds that benchmark, staff, made up of college students and known to campers as chiefs and princesses, shower the children with hugs, high-fives and words of affirmation.

“It’s a self-esteem builder,” says Laura Vosahlik, school psychologist at Metropolitan School District of Wayne Township and former princess, referring to the power of positive reinforcement. “They are safe, accepted for who they are, loved and appreciated for their uniqueness.”

Staff rewards benchmark achievements throughout the day, but the elusive Captain English distributes the most coveted awards based on good behavior he’s witnessed that morning. Upon announcing the award recipients, the small cafeteria erupts in unison with loud applause and cheers for each award recipient.

“It’s the highlight of my day, every day,” says Mrs. Barnett. “For some kids, they’ve never won anything before. They’re being recognized for being successful.”

Success at camp involves academic excellence in addition to benchmarking the growth of a child’s social interactions. The camp’s unique approach to learning includes a morning of math lessons at the pool, language arts under big trees and science in a sun-lit field. Each camper also willingly takes two breaks from fort building every afternoon for one-on-one, personalized tutoring.

“It gives children who are usually bossed around and told to correct their own behavior the opportunity to make their own choices and see the natural consequences of doing the right thing.”

Both Kettlewell and Vosahlik refer students to camp and have the unique perspective of seeing the results it produces in the classroom. Shy students having their first sleepover, the elimination of behavioral charts, and a significant boost in self-esteem: all underscore a life-changing camp experience.

“Its great to be a part of something you can literally see [happening] day to day. The proof is right in front of you. Kids are changing and the staff is growing,” says Mr. Barnett.

Even the kids recognize a difference. One child wrote in his evaluation, “I don’t know what you all do, but you make me be good.”

Capt. English will never know the happiness or impact his planned gift brought to thousands of children through Englishton Park Summer Camp, but to the children spending 10 days at his estate every summer, his legend – and gift – lives on.

For more information to learn more about planned giving opportunities, please contact Rob MacPherson by phone at 317-634-2423 x 199 or by email at robm@cicf.org.