6 Years after Quake, Lawrence North Senior from Haiti Aspires to be an Architect 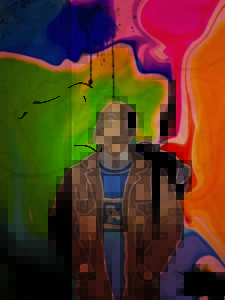 “I came to the U.S. with a pencil and a candy wrapper in my pocket,” explained Alvin Laguerre, a senior at Lawrence North High School and one of nine students from Marion County to receive a Lilly Endowment Community Scholarship, a four-year, full-tuition scholarship administered by Independent Colleges of Indiana in partnership with The Indianapolis Foundation.

“My family and I are fortunate and have been blessed all of our lives. My parents endured a lot,” said Laguerre.

Alvin and his family came to the United States when he was in the 6th grade. Since then, his family’s immigrant status has changed from visitor to renewable, temporary-protected status. They are working toward citizenship, but “it’s a tedious process” and can take 5-10 years because of the waiting list.

“Every place we would have been was crushed, our home, my parents’ businesses, but our family was safe,” said Laguerre. The tragedy fueled Alvin’s dream to become an architect so he could help and protect others.

Building up the world

“I’ve wanted to be an architect since I was five,” said Laguerre. “It is a passion—a love. I believe my success will allow me to build my own an architectural firm that serves ghettos and impoverished areas globally.”

Alvin’s family moved to Indiana during a winter snow storm in the middle of 7th grade. Alvin spoke Creole and French, but understood little English.

“Kids were mean because I had an accent,” said Laguerre.

Alvin found English classes distracting, so he taught himself the language by listening to music, watching movies and reading books. Learning English meant Alvin could start over socially, but high school challenged him in other ways.

“As a sophomore, I didn’t really try,” said Laguerre. But Alvin’s English teachers encouraged him to take advanced and online courses.

“It was a whole new world,” said Laguerre.

Another teacher invited him to be in a Peer Facilitating program, where he talks to troubled kids in elementary school, helps them with school work or just listens. “Some of them just need someone to speak to them and to be their friend.”

Alvin also does graphic design projects, video editing, and animation for school clubs and has been involved in the Starfish Initiative. “It’s amazing,” says Laguerre. “They provided me a mentor, and he helped me discover my passion.”

Unable to pay for college, Alvin tried to apply for several scholarships, but as a non-citizen, didn’t qualify. Then his guidance counselor told him about the Lilly Scholarship. Alvin will attend Ball State University next year and will be the first in his family to go to college.

“I just cannot believe it,” said Alvin. “Now I am happy, and ready to go. I want to inspire people. It’s never too late to learn or to catch up. It doesn’t matter what you’ve done in the past, it’s what you do in the future.”

Learn more about the Lilly Endowment Community Scholarship, as well as other scholarships administered by CICF.