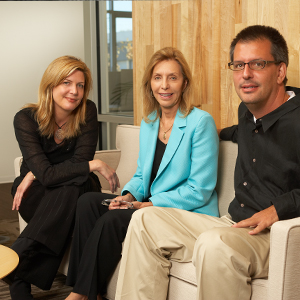 One Family’s Philanthropy, Generations in the Making

Celebration for the 100th anniversary of The Indianapolis Foundation and 25th of Legacy Fund would not be possible without the vision of the Efroymson family, whose generosity has transformed Central Indiana and its community foundations for four generations.

Philanthropy runs in the family.

Lori and Dan opened their family’s donor-advised fund in 1998—the largest donor-advised fund in the United States at that time. Though Dan passed away shortly after the fund’s creation, Lori and their adult children, Jeremy and Elissa, carry on the family’s philanthropic legacy. Late in 2015, Efroymson Family Fund effectively gave away 100 percent of their original gift in less than 20 years.

A focus on vision, venture and opportunity has helped guide the family’s grant-making. A particularly special project—a $1 million grant for the restoration of Hinkle Fieldhouse at Butler University in 2014—earned the Cook Cup, a top honor for preservation work in Indiana.

The Efroymson Contemporary Arts Fellowship, an initiative led by Jeremy, continues to support individual, visual contemporary artists. After the 10th round of fellowships this fall, the Efroymson Family Fund will have awarded $1 million to 50 contemporary artists since the program’s inception. Elissa, who lives in Chicago, has been a supporter and champion of Chicago High School for the Arts (ChiArts), a college-preparatory, pre-professional arts training program for creative writing, dance, music, theatre, and visual arts.

On the cusp of grant-making history, the family has again stepped up their community leadership in 2016. The Efroymson Family Fund has awarded $250,000 to IN Light IN, a dazzling, free, two-night interactive light festival featuring artists and performers from Indianapolis and beyond. IN Light IN is produced by Central Indiana Community Foundation, in partnership with Northern Lights.mn to honor the Indianapolis Foundation’s 100th anniversary, but only made possible by donors such as the Efroymson family.

The Efroymsons are the embodiment of strategic family philanthropy. They fund organizations that reflect their strongest values and convictions, and each advisor actively participates. CICF congratulates Lori, Jeremy and Elissa on their incredible accomplishment of awarding $90 million in pursuit of their family’s philanthropic vision.

The impact of their giving has changed communities and lives; the impact of their leadership has undoubtedly encouraged many others to give of themselves, too. CICF is proud to have the honor of partnering with four generations of the Efroymson Family.

Please pass this on to the Efroymsons: In 2001, I was a Co-Director of Dayspring Center as it was emerging from “undeclared” bankruptcy. The shelter had just reopened after a brief closure to reorganize and was repairing relationships with the community. I remember that the Efroymson Fund stepped up to show it had continued confidence in Dayspring as a place to help homeless families with children. Without the early support of the Fund, it is likely that Dayspring would have permanently closed. Thank you for all your family has done and continues to do for our community! The Rev. Michael Scime