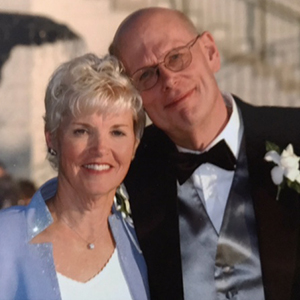 Dr. Corbin Roudebush considered his diabetes and thyroid patients family. His wife of 43 years, Judy Roudebush, says he cared so much for his patients’ well-being that he gave them his home phone number and promised to respond to emails within 24 hours from anywhere in the world. Now, 10 years after his passing, Judy has made a charitable gift that will ensure his patients will continue to receive the immediate support her late husband was known for providing.

In 2015, Judy contacted Central Indiana Community Foundation to brainstorm ways she could honor her late husband with a charitable gift. She worked with her philanthropic advisor to find a unique way to give back to Dr. Judy’s patients at Indiana University Health Methodist Hospital, where he practiced endocrinology for 30 years.

Judy’s daughter, a nurse at Methodist Hospital, helped identify a gap in diabetic education for patients leaving the hospital. “She kept saying, ‘You know Mom, there are not enough nurse educators for our patients,’” says Judy. Nurses often have as little as 10 minutes to explain diabetes management to patients, making a return to the hospital inevitable.

Other nurses at the hospital confirmed this problem and told Judy they wanted something patients could take away from the hospital. They also noted that even patients with little money or no insurance almost always have a cell phone.

And so, the idea was born to underwrite the costs for the development of an app that gives patients access to their numbers and clinical information on the go. The app, “Indiana University Health My Diabetes Tracker,” took two years to develop and is set to release in early 2018. Judy’s CICF philanthropic advisor assisted along the way by asking important questions, setting up meetings and organizing research to help make the process as smooth and easy as possible.

Though underwriting the app was one of the largest and most impactful gifts Judy has made to date, she’s no stranger to philanthropy. After her husband died in 2008, Judy describes having an “overwhelming feeling” that she needed to get her philanthropic goals organized. Tired of tediously researching and preparing paperwork required to give an organization a complicated gift of stock, she reached out to CICF and opened a donor-advised fund.

“CICF took that off my plate completely,” says Judy. She now enlists CICF to pull financial reports for not-for-profits that mean the most to her and handle all paperwork associated with complicated gifts, such as stock. “It changed from dread to fun and joy.”

Judy annually awards grants that support arts education, but her involvement in the “IU Health My Diabetes Tracker” app has special meaning to her. Not only does it honor her late husband in a way that she says would make him proud, it also gave Judy the opportunity to talk about philanthropy with her daughter. Judy says her daughter’s excitement for such a transformative gift gives her goosebumps.

“It feels wonderful,” says Judy said about funding the app. “It feels like it’s the right fit for what I’d like to do to commemorate Corbin. And it feels like I am the luckiest person in the world to be able to do it.”

For more information about how CICF can help you meet your charitable goals, contact Rob MacPherson, vice president of development and philanthropic services, by email at robm@cicf.org or phone at 317.634.2423 x 509.

On June 15, 2022, The Indianapolis Foundation and Leadership Indianapolis hosted a community conversation, Power, Money and Time: Defining Equity for Your Organization with Mina…Read More.