GANGGANG is Committed to Ignite the Culture Industry

This has been the year of discomfort. Across the city and in our nation, 2020 has made many of us realize some uncomfortable truths in our own lives:

Our homes are in desperate need of some TLC.
We didn’t need to buy all this toilet paper.
Teachers have an inhuman amount of patience with our kids.
….and systemic racism is still alive and well.

This year has caused people—in particular White people—to have uncomfortable conversations they may never have confronted otherwise regarding racism. From the COVID-19 pandemic to the racial reckoning happening in our streets, individuals have had to address their part in the perpetuation of racist systems. The shift from simple awareness to accountability has inspired many of our own neighbors and community leaders to ask how they can progress onward to our goal of racial equity.

GANGGANG is the newest startup on the block. Born out of the innovative minds of power couple Malina Simone Jeffers and Alan Bacon (#relationshipgoals), GANGGANG is a cultural development firm. With initial investments from CICF and other leading philanthropic entities in the city, the organization seeks to promote and invest in culture entrepreneurs. And while it does support all “people of culture,” the organization has a strong slant toward racial equity. During its incubation period of the first three years, GANGGANG plans to invest at least $100,000 into cultural startups, with 70% of those investments allocated to Black founders and Black-owned startups. 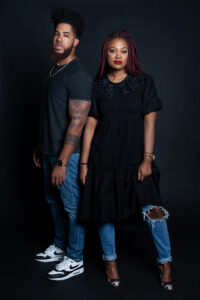 Here’s an uncomfortable truth for Indianapolis—too many creatives are leaving the city. As a writer in both my professional and personal life, I often find myself in groups of creatives who far too often say the same thing: I have to leave Indy to “make it.”

“A city is not in a good place when creative people stop dreaming,” said Bacon. “Without a culture focus as a city, you will continue to lose and retain talent. The loss of this population affects economic development.”

There is intersectionality between art and culture in the creative economy. And while Indianapolis has historically done a commendable job of supporting the arts sector, the cultural sector being a separate and actual economic industry in its own right has historically been overlooked. GANGGANG is here to change that.

“If we’re able to get Indy to understand the value and worth of culture, we’ll be a stronger, more vibrant city,” said Bacon.

GANGGANG has a process for identifying cultural startups that may be entirely new or ones that are already active but require further investments to make a larger impact. Within its business model is a reflection of venture capital firms. It has an advisory council, as well as an investment committee, that helps support and guide its mission. It plans to use metrics such as impressions, media coverage, anecdotal responses, and other criteria to assess the success of its efforts. Overall, it is building a cultural infrastructure that allows for a robust portfolio of programming, events and public art which will ultimately drive connectivity between people and economic growth in the city.

“But think about the Black experience and culture in our daily lives. It is also vibrant. It is full of food, laughter, overcoming, color, praise and dance…”

When speaking on culture, you can’t ignore the effect of Black culture on our society. From food to fashion to music, Black culture has embedded itself into the fabric of American society. The fact is the Kardashian-idolized, “Bo Derek” braids originate back to thousands of years ago in the palaces and war rooms of Ethiopia. And although John Lennon may have famously said “before Elvis, there was nothing,” the sounds of Little Richard and Ray Charles pre-dated the King of Rock-n-Roll. GANGGANG has an almost ‘reparations’ approach (sans 40-acres-and-a-mule) to give back to Black culture.

“So much of the talk around racism is within the context of death and pain and anger—and rightfully so,” said Jeffers. “But think about the Black experience and culture in our daily lives. It is also vibrant. It is full of food, laughter, overcoming, color, praise and dance. That’s also the Black experience. And that’s what we’re uplifting through GANGGANG.”

While 2020 was a catalyst to garnering support for this venture, GANGGANG fills a need that was here long before this year. For Indianapolis to continue our trajectory committed to making this a community that is equitable for all—no matter race, place, or identity—supporting organizations like GANGGANG that are putting culture and equity at the forefront is essential.

So as some folks are still waiting for this troubling year to end, GANGGANG purposefully stopped waiting for the light at the end of the tunnel and lit its own path to ending racism and enhancing our community itself. And that makes me—people that look like me and people of culture—comfortable living in this city and contributing to its growth and success.

Read more about GangGang and how the idea came to its founders, Malina Simone and Alan Bacon, in this article from PATTERN Magazine.

Learn how you can contribute to GANGGANG’s initiative