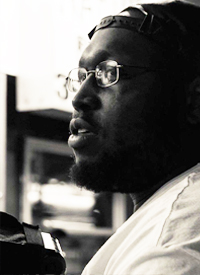 A conversation with Wildstyle

April is Fair Housing month. While Indianapolis has a history of rapid economic development, we cannot ignore its legacy that is laced with redlining, gentrification and systemic racism. So how do we move forward in economic growth without dishonoring, displacing, or disempowering underappreciated communities? Wildstyle Paschall—writer, creative, activist and CICF community ambassador—sat down with our team for a conversation on gentrification, fair housing and a path forward.

How do you think gentrification has affected Indianapolis over the past 20 years or so?

Gentrification has really pushed people of color—particularly Black people—to outer suburbs. The people who were in the Fall Creek Place area as it’s called now, and even the folks in my neighborhood of Riverside, as it’s going through gentrification, are being pushed out to Post Road or Motor Road. Both are far away from transportation, therefore, hindering the ability to get to jobs.

Basically, those areas were built in the 50s and 60s for people that all had cars, usually two cars per household, and gentrification is pushing a lot of low-income people out there, and they may not have a car at all. So, you know gentrification is exacerbating the problems that were already in existence—such as poverty—concentrating it and making it even worse, by removing people’s access.

The bonds of community and culture are broken. It ends up being that people are continuously starting over. People are basically having to constantly move to a different environment. They hope to try to get that sense of community, to wherever they are exiled to.

When you look at things that are culture in this city, some of the festivals and stuff like that, imagine like the Penrod Arts Fair, and all the people in that neighborhood that have contributed to that all the time. Well, if they get scattered across the city every 10, 15, 20 years, we wouldn’t have culture like that, you know. We don’t give people enough time to build and gel with each other and then we look back and wonder what went wrong. We talk about these placemaking projects and stuff. Well, you wouldn’t need that if people were able to stay in one place and they were getting resources to program their own neighborhoods. Instead, you constantly have somebody always coming in and acting like, “oh, you poor people, let’s show y’all how to do art.” Well maybe, with packing up their boxes all the time, they don’t have time to worry about the arts or giving you a physically defined culture that you can look in at in their neighborhood and see.

At CICF, we frequently talk about equity and power. How do think gentrification and power are related?

Gentrification is all about power, economics and equity. And gentrification starts because someone has the ability to, essentially take, by legal means, property and land from poor people or marginalized people, and so that’s always a power dynamic. And anybody that understands finance or real estate understands buy low, sell high. And so, the power dynamic is that Black and Brown neighborhoods are undervalued. They’ve been redlined to where we can’t get loans to fix up. People that are renting from landlords can’t get a loan to actually buy a house in the neighborhood.

And so, the property values remain low and you have that power dynamic, which is driven by racism, that eventually allows the city to come in and offer incentives and everything else to developers. And this allows developers to come in and buy low, fix up stuff, do creative placemaking, bring in artists to do creative placemaking projects, and then sell high, as they’re displacing those people from neighborhoods that they’ve lived in all their lives and some people, like several generations.

It starts with inequity. The racism that caused redlining is instrumental in being able to gentrify. If Black people owned their homes at the rate that White people do and the homes cost as much money, gentrification wouldn’t be possible, because you can’t buy low enough to make it worth your while to make a profit reselling it. People would go do something else. Like, it wouldn’t be gentrification.

And so, when we think about, you know, foundations and not-for-profit entities that are trying to do like these placemaking initiatives, how can they avoid contributing to the displacement of whole communities and gentrification?

One of those things is who they have around them and who they’re talking to. A specific example is, oftentimes in the past, who not-for-profits have at the table or on their boards, is real estate developers and realtors. So, these people are like, “we need your foundation to come to this neighborhood that we’re revitalizing, and we want you to spend money to help art and culture.” Well, instead not-for-profits and foundations automatically just listening to them like, “Yeah, that is the hot, new neighborhood. Let’s spend money over there,” why don’t you go build relationships in the neighborhood that the realtors are not talking about? Go spend some money over there. Go support art and culture over there in a neighborhood that is not considered economically viable by the power structure that is seeking to exploit the land.

That’s the best way to counteract that. I know there’s politics and all of that other stuff, but foundations are going to have to start pushing for that more. Because, you know, when the developers call the not-for-profits to the table to do great work on their selective areas, it’s usually because they’re about to run everybody out of there and they want to get media attention. They want potential buyers that are looking to move in the next couple of years to look and go, “this is the hot, new neighborhood. Look at that project they got there.” They’re not focusing on areas that, quite frankly, need the help just as much and those people, you know, aren’t in any threat of being moved to a different place, but there’s nobody that seems to care about them.

So, what does an investment in an under-appreciated community actually look like?

You’re going to find that when you give people that are doing art in their neighborhood resources and the ability to do that somewhere, you’re going to get stuff that may not entice other people in the city that want to go live in that neighborhood. I’ll give you an example. In my area, that’s called the near-northwest in Riverside. There was a business, and they painted a mural on there and it had Obama and they were doing Black figures and everything, and eventually, the city made them take it off (this was years ago). The city made them take it off and paint over it because they felt it was an advertisement—even though it wasn’t. Well, that’s the type of art you’re going to get in our neighborhood and foundations and not-for-profits need to go support what people actually want to do rather than necessarily painting geometric shapes and abstract art that really appeals to White culture more so than Black cultures. Black artists are going to work differently than White artists and you know, the culture is different. Foundations must recognize this if they truly want to be involved and help break down the barriers.

Now the Arts Council made it possible so that we got a mural in my neighborhood that it looks like what people wanted it to look like. We have some of the underpass under I-65 on Clifton, and it has red, green, black colors, Black people gardening, skating, swimming, a preacher preaching, and a girl doing another girl’s hair. You don’t see a mural like that anywhere else in the city of Indianapolis. Foundations need to understand that yeah, when you put money into the hands of the people, the arts probably won’t look like your culture if you’re a predominantly White organization. And that’s a good thing. That meant that your money went far and into the hands of the people and did the right things.

Love that. Foundations have to listen to the people in the actual community and not dictate what these not-for-profits deem is “correct.” So lastly, what do you think the “average Joe” can do to improve equity surrounding housing?

Not everybody works in an industry that has the objective to make a difference, but everyone has a choice in their job. Racism is prevalent in every single sector of the workplace, of society really. And oftentimes, White folks have an opportunity, when they can clearly see some things wrongs. The opportunity to say, “you know what, that’s not right” or “we’ve always done it like this, but that doesn’t make it right.” You have the choice to speak up and start calling your colleagues or your business to task about what they’re doing to end racism.

Whether you work in the banking profession. Whether you work downtown at the city’s code enforcement that often ends up targeting lower-income neighborhoods, by aiding gentrification to keep fining these people in the neighborhoods and make it harder for them to keep their homes and they’ll sell it or end up losing it. You got people that work with realtors. You have realtors themselves who have been instrumental in housing racism. You have all these different sectors, and if everybody in those sectors speaks up, then racism and fair housing issues would have to end, right? If everybody spoke up and started doing the right thing, it would have to end.

I think everybody has to realize they have agency and often times your job is not necessarily you giving to a not-for-profit where you don’t even know where the money’s going to. It’s your agency and what you’re doing with your White privilege, with your power. Go speak up and hold others you know—hold other White people—accountable. That doesn’t happen enough. Often times it’s, “well, that’s not my concern” or “I’ll just donate to the United Way or CICF.” What you have to realize is that organization can only do so much. Those organizations don’t always have the opportunity to speak up about what a private business is doing or they might not even know. You need to speak up. Using your agency all the time to be anti-racist is important and impactful. That will change society.