Brian Payne, president and CEO of Central Indiana Community Foundation and president of The Indianapolis Foundation, will retire on June 30, 2023. 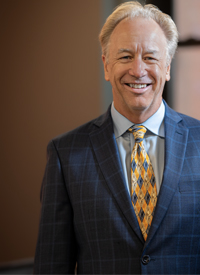 Recently included in the inaugural “Indiana 250” of the state’s most influential people by The Indianapolis Business Journal and lauded for “big ideas” and the ability to “make things happen” by Indianapolis Monthly, Payne has earned a reputation for innovation and ambitious vision through 22 years of dedicated service.

Since joining in November 2000, Payne is credited with leading significant growth across the philanthropic collaborative, which now includes CICF, The Indianapolis Foundation, Hamilton County Community Foundation, IMPACT Central Indiana and Women’s Fund of Central Indiana. The collective’s assets have tripled to over $1 billion and annual grant making more than quadrupled to over $95 million under Payne’s leadership.

“Brian Payne has transformed The Indianapolis Foundation during his tenure. Today, we are not just bigger and bolder, but also more equitable and attentive to the voices of the communities we serve. Brian leaves an impressive legacy for our next leader to build upon. I am profoundly grateful for his passion, leadership and dedication.”

In 2018, the collaborative changed its collective mission, making equity and anti-racism in Central Indiana a multi-generational commitment. CICF and The Indianapolis Foundation have been recognized locally and nationally for the courage of their commitment and their progress. Payne served as one of six community foundation executives on the design task force of NEON – Nexus for Equity + Opportunity Nationwide and CICF is one of the founding members of this national effort to dismantle structural and systemic racism to achieve economic and cultural mobility.

“Going on a racial equity learning journey with my local and national colleagues and our foundations’ board of directors has been the most important opportunity in my career,” Payne said. “I especially want to thank my BIPOC colleagues and board members for their trust, friendship and mentorship as we have worked arm in arm in an attempt to make our region and country better and more just for all individuals—no matter place, race or identity.”

Payne has been an influential leader far beyond his role as head of CICF and The Indianapolis Foundation. He is the founder and founding artistic director of the eight-mile Indianapolis Cultural Trail: A Legacy of Gene & Marilyn Glick. Payne is also the founding board chair of The District Theatre, which is committed to helping resource and incubate a Black professional (Actor’s Equity) resident theatre company for Indianapolis in the Mass Ave. Theatre and Cultural District. He is the chair of the IUPUI Advisory Board and serves on the boards of Visit Indy, Indiana Repertory Theatre and 2024 NBA All-Star Game board. Payne recently concluded a two-year term as board chair of Forward Cities, a national organization committed to helping cities build inclusive economic growth. Payne has previously served on the boards of Indy Chamber, United Way of Central Indiana, TechPoint Foundation, TeenWorks, Key Bank Advisory Board, Downtown Indy, Jordan College of Fine Arts at Butler University, Brebeuf Preparatory School, Tourism Tomorrow and Leadership Indianapolis.

A champion for equity, Payne is a sought-after speaker nationally and internationally, favoring themes including dismantling systemic racism; neighborhood empowerment; placemaking and interrupting gentrification; multi-modal transportation, trails, livability and the power of connectivity. He has spoken at national conferences, including the American Planning Association, CEOs for Cities, Forward Cities, Robert Wood Johnson Foundation, Council on Foundations and the United Way. He has also consulted with dozens of cities in the US and Canada on urban trail projects.

A California native, Payne began his career in 1986, running a professional summer Shakespeare festival in Santa Cruz, CA. In 1993, he came to Indianapolis to lead the Indiana Repertory Theatre as managing director. In that role, he helped grow the theatre’s endowment from $1 million to $11 million by 2000.

“Brian’s leadership over the years has contributed to the significant growth of CICF and The Indianapolis Foundation. As a result, we carefully considered separating the roles between the two organizations as this is most reflective of the evolution of our work and in alignment with our strategy to build capacity and efficiency to best serve the community,” said Marisol Sanchez, vice president of legal affairs, general counsel at Endress+Hauser, Inc. and board chair for CICF who is co-leading the searches with Molly Wilkinson Chavers, principal at Blue Mercury Consulting and board secretary of The Indianapolis Foundation. Molly added, “We are excited to build upon the strength of the philanthropic collective and maximize the overall impact we can make with two leaders focused on collaboration for greater impact

Koya and the search committee have begun engaging with community leaders and constituents to develop a position profile for both roles. The Koya team can be reached directly at cicf@koyapartners.com or theindianapolisfoundation@koyapartners.com.