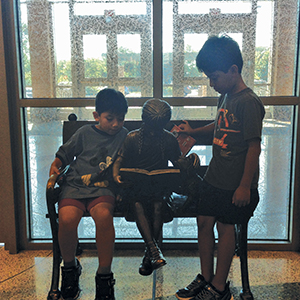 A library’s endowments help provide over 2,000 programs to community

The Carmel Clay Public Library Foundation’s endowment, opened in 1993 at Legacy Fund, had become dormant in recent years, but that changed last year when a couple made a significant gift to the endowment just as the library was celebrating its centennial year. “It was a perfect storm” says Liz Hamilton, executive director, Carmel Clay Public Library Foundation. They were able to pair the centennial year with a challenge for donors to match the generous gift. But it wasn’t just current donors that contributed.

The biggest surprise to the foundation was the small, unexpected donations that came from everyone in the community. “It was originally 100 people donating $1,000, but book clubs wanted to get involved, our guild, even the library staff got together to make a $1,000 gift,” says Beth Smietana, communications manager, Carmel Clay Public Library. “People who wouldn’t have been able to be involved were [able to] because they were involved in a group that cared about the library.”

From start to finish, the foundation’s endowment grew six times its original amount in just 12 months. Every not-for-profit dreams of a campaign this successful, but does it really take a perfect storm?

“Part of the reason the campaign was successful was because of the number of people that recognized that the library plays a vital role in our community,” says Anne Hensley Poindexter, chair, Carmel Clay Public Library Foundation.

At 3 p.m. every weekday, a flood of Carmel High School students walks through the doors of the library. Entrepreneurs frequently use the private rooms of the library to conduct business meetings and last month, children had the opportunity to practice reading to dogs. In 2014 the library hosted over 2,000 programs free to the community. Hensley Poindexter says getting one of the free tickets to movie night is almost impossible due to popularity.

Carmel Clay Public Library Foundation uses the interest earned on its endowments to fund the programs and opportunities that make the library what it is today.

“Our job is to raise funds…not to manage them,” says Hensley Poindexter.

And that’s the point of their endowments at Legacy Fund—it allows them to spend more time focusing on making their community a better place for everyone. “My hope is that this endowment will ensure that if we come to a point that the library needs additional funding to continue to offer these types of programs that the endowment will allow them to do that,” says Hamilton.