The Legacy Fund Living Legacy Award was given to the children of A.W. “Mac” and Arline Reynolds, including Gary and Cindy Reynolds, as well as Reynolds Farm Equipment for their philanthropic contributions to Fishers and Hamilton County. The award was made during Legacy Fund’s Celebration of Philanthropy on Thursday, November 6th. An annual event, Celebration of Philanthropy was held at the Ritz Charles in Carmel, and in addition to the award ceremony, featured a showcase of 37 of the county’s not-for-profit organizations. Approximately 400 people attended the event. 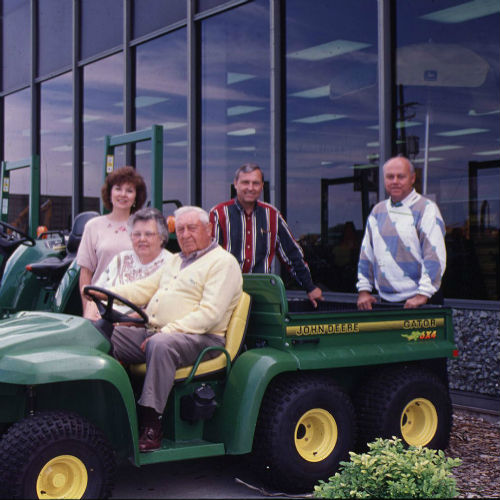 Created by Legacy Fund, an affiliate of Central Indiana Community Foundation, the award recognizes Hamilton County residents for their philanthropic contributions to the community. The Reynolds, and the company founded by Mac Reynolds and wife, Arline, in 1955 were the sixth recipients of the Living Legacy Award. Mac and Arline were active in the Fishers United Methodist Church, the church’s food pantry (Come To Me), Central Indiana Youth for Christ, Good News Ministries and Third Phase, Hamilton County’s largest shelter, food and clothing pantry.

Both were involved in a number of service organizations: Arline Reynolds participated in the Carmel Music Study Club and President and District Officer of the United Methodist Women. Mac Reynolds was a charter member of the Fishers Lion Club and also the Community Volunteer Fire Department and in 1998 received the state’s highest service award, The Sagamore of the Wabash. Free to the public, the company’s annual Christmas light display raises money for Come To Me Food Pantry, and annually surpasses $30,000 in contributions to the pantry.

Mac Reynolds passed away in 2008; Arline died in 2013. In 2014, Reynolds Farm Equipment headquarters were relocated from Fishers to Atlanta, Indiana. Gary Reynolds, now the company’s president, is a respected member of the Conner Prairie Board among other groups and not-for-profit pursuits. Previous recipients of Legacy Fund’s Living Legacy Award include the Crosser family, Sonny Beck family, Judi Campbell Lowe, M.D. and family and the Jim and Juanita Harger family.

“The Reynolds family and their company represent the best of Hamilton County and our community, and are truly the embodiment of philanthropy,” said Terry Anker, President, Legacy Fund. “They have given their time, talent and treasure for people in need now, and also for our community’s future and wellbeing. We have all benefited from their dedication and gifts.”