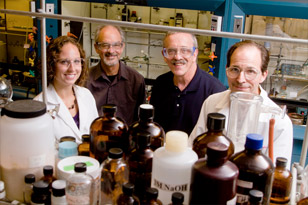 Dr. Bill Scott is a frugal man. The former Eli Lilly & Company chemist and current Indiana University-Purdue University Indianapolis (IUPUI) School of Science research professor appreciates doing things in money-smart ways. He prefers walking or taking an IndyGo bus to get around town. That thrift also drives his interest in and ability to support a project that uses the intelligence and energy of college students to work towards disease treatments that might otherwise go undiscovered.

Scott spent more than a quarter of a century at Lilly, researching possible drug treatments for the pharmaceutical giant. And, in that time, he saved his pennies, pennies he is now able to utilize, alongside additional funding from a variety of sources, to get college students engaged in hands-on research through his Distributed Drugs Discovery (D3) program.

Drug companies can’t make much profit on solutions to diseases that often ravage the lives of people in developing countries. But, thanks to Scott’s innovative approach, D3 students at IUPUI – and in schools around the world – work and learn in research labs and, with a bit of luck, they might just synthesize a compound to cure malaria.

Because Dr. Scott has chosen to live modestly, even while working in a lucrative field, he is able to use his savings for D3, transforming fiscal wisdom into a passion project. Through his Distributed Drug Discovery Fund, a Personal Foundation of Central Indiana Community Foundation (CICF), Scott provides ongoing support to the D3 program. And, it’s little surprise that he first connected with CICF on a form of public transportation – Amtrak.

That connection led to the creation of the Distributed Drug Discovery Fund, and the video included here.

To learn more about Dr. Scott’s fund or to create your own Personal Foundation – the easy, low-cost alternative to private foundations – please contact Rob MacPherson at 317-634-2423, ext. 509, or robm@cicf.org.