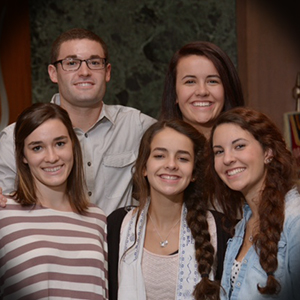 All hands on deck for the Zipes family

Every Thanksgiving, somewhere between, “I’m so stuffed that I need a nap” and “Oh, is that pie?” the 11-member Zipes family holds their annual family meeting in their Carmel home to allocate grants from their family fund. The family engages everyone—Joan and Doug Zipes, their three adult children, a spouse, and their five grandchildren—in a purposeful conversation about how to use their family fund to impact their community.

Joan and Doug Zipes, married 54 years, know a thing or two about family and philanthropy. Both Joan and Doug grew up watching their parents give back in whatever way they could. For Doug, who grew up less fortunate than his wife, that meant his parents opening their home to family of friends and providing meals, even when they barely had enough themselves.

“It’s important for parents to remember ‘do as I do, not as I say,’” says Doug. “Parents need to be a model for their children.”

Tzedakah (sa-da-kah), a Hebrew word that describes the importance of charitable giving in Judaism, starts at a young age, Joan says. It’s a big part of the Zipes’ lives and a family tradition—every member of the family volunteers and, or, donates to causes individually. When the family began discussing the idea of a family fund in 2013, it wasn’t a hard decision to proceed.

“The process, to me, was just an extension of what we’ve always done with the family,” says Joan. “It was a natural evolution of what we did.”

And all along it was important for Joan and Doug to involve their entire family. They felt strongly that every person’s opinion should carry equal weight. When their fund opened at Legacy Fund in 2013, their youngest of five grandchildren was 10 years old and the oldest 20 years old—a generational gap that could make aligning values a challenge for the Zipes.

At their first family meeting, just before Thanksgiving in 2013, Ryan Brady, philanthropic services advisor, CICF, facilitated a values discovery workshop. Ryan made the process engaging and fun, and through a variety of activities, helped determine focus areas for the family’s giving.

At the workshop, each family member’s values, interests and goals were identified before Ryan helped align them to form a family mission statement. “They [CICF] went through a whole process that was extremely impressive,” says Joan.

The family has aligned their giving to focus on helping children obtain education and animal welfare. Debbie Zipes, Joan and Doug’s daughter, facilitates the family meetings by typing a synopsis of potential grantees and presenting them to the family. She also coordinates site visits for the family to witness the impact of their giving first-hand. The grandchildren were most affected by their visit to Outreach Inc, an organization that provides resources to homeless youth in Central Indiana.

“I knew homelessness existed but I never understood the extremes,” says Hannah Zipes, grandchild to Joan and Doug. “They need every single penny to go places, eat, or sleep. Or put socks on their feet.”

Because the grandkids don’t have a steady income like their adult counterparts, the process is more about exploring values and seeing the impact rather than making financial contributions. But Hannah and her sisters do give a portion of their dog-sitting earnings back to the fund and their grandparents match it—as they do for everyone in the family.

According to the grandkids, the adults tend to be more indecisive than the kids. But everyone has equal opportunity for influence in the family’s decision.

“Thanksgiving is a perfect time to begin a conversation such as this with the family,” says Joan. “It gives them an opportunity to think about what happened in the last year? And what they’re thankful for? What has made their life better? What can they do for someone else to make their life better?”

The process of pooling money together for greater philanthropic impact in their community—changing lives and seeing first-hand those lives in transformation—has brought the family even closer together. The Zipes family isn’t unlike yours. Thanksgiving is a great time to start a conversation about philanthropy with your family.

To learn more about how CICF can help facilitate a conversation about multigenerational giving, contact Ruthie Purcell-Jones, director of philanthropic services, by email: ruthiep@cicf.org, or by phone: 317.631.6542 x506.