A Tech City in the Making 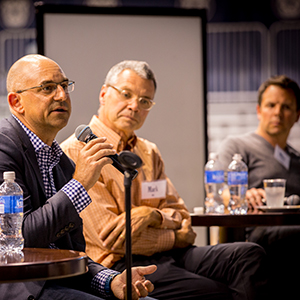 CICF believes that for Indianapolis and Central Indiana to thrive in the 21st century, we as a community must do an outstanding job of developing, attracting and retaining highly educated, creative, entrepreneurial and community-minded citizens.

HOW DO WE ATTRACT, DEVELOP AND RETAIN TALENT?
All three panelists mentioned programs that recruit aspiring tech entrepreneurs to Indianapolis, as well as promote retention. For example, TechPoint’s Xtern program is a paid summer internship which provides free housing on IUPUI’s campus; NexTech teaches elementary-age children computer science skills, such as coding; the Orr Fellowships is a two-year, paid fellowship which places top college graduates in competitive tech companies and provides personal mentorship and housing in Indianapolis.

Programs such as these embed tech-hungry entrepreneurial men and women in the tech community in Indianapolis. Before a summer at TechPoint, 12 percent of Xtern participants said they wanted to work in Indianapolis after graduation, but after the internship, the  number went up to 78 percent. All three panelists agreed that once people experience Indianapolis, it’s easy to fall in love with the city.

Is ‘Brain Drain’ still an issue for Indianapolis?

“Holistically we are doing a better job of keeping superstars in the state through various programs and internships,” said Dorsey. Even so, millennials now make up 45 percent of the workforce— 50 percent of that generation does not expect to be with their employer more than three years.

Fitzgerald sees the growing tech community as a positive for recruitment and retention, especially for millennials. “When people come from out of town, they say, ‘If it doesn’t work out for me at that company, what does the rest of the community look like? Brain Drain is no longer a major issue because there is so much more opportunity now.”

Dorsey mentioned several companies that have moved their headquarters to Indianapolis because of its affordability and talent pool. For example, Appirio, a leading cloud computing company, chose Indianapolis for its second office after a worldwide search, and eventually moved its national headquarters from San Franscisco to Indianapolis.

Why does Indianapolis stand out?

“It comes down to creating a great place to live where people are comfortable,” said Hill. “We have community. The tech community is small and we know each other.”
Additionally, Dorsey commented on how important beauty and great design is to making a city more livable. Fitzgerald said Indianapolis sells itself, “If you only had a great job, or only a great city, you won’t win. Having both is really important.” And for the millennial generation, opportunities for community engagement outside of work is especially important.

All three panelists agreed that a community needs to invest in itself in order to continue its growth in all industries. Invest in schools, public safety, roads, beauty, connectivity, but also invest in late and expansive stage capital for small tech companies beyond their startup years.

Before and after the discussion, Angel Investors and guests had the opportunity to shoot baskets at the legendary Hinkle Fieldhouse. And even meet one of college basketball’s most adored mascots.