I Am No Longer Color-blind 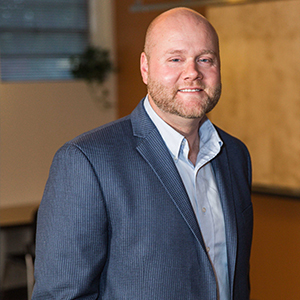 “Drew, if we get pulled over, you know I can’t move right?”

At first I laughed, thinking he was joking. A few seconds passed and I quickly realized that my best friend was legitimately concerned. We were headed home from a long weekend with friends near the Gauley River and, trying to make good time, I was clocking 10 to 15 miles over the speed limit on the outskirts of a small Midwestern town. Behind us was a state police trooper just a few car lengths back. While my first thought was that of a $250 ticket, my friend’s thoughts took a different turn. Perhaps he was thinking of Philando Castille or Sandra Bland, Alton Sterling, Trayvon Martin, Eric Gardner or Michael Brown. We’d had a great time on our trip and have never had an issue with police anywhere—however, on the slightest possibility that we would have been pulled over, there was a palpable anxiety in the car. Just a moment later, the police cruiser faded from sight just as quickly as it had arrived. While the situation resolved itself and we were safe, the experience had a residual impact on me in the year since it happened.

You see, I’ve never had ‘The Talk’ that black parents must have with their sons because I am a white man.

…having family, friends, neighbors, or colleagues of color was just a normal thing—it made no difference. People were people.

I grew up in an upper middle-class family in Lawrence Township on the Eastside of Indianapolis, moved to Bloomington for college at Indiana University and left the state for a job shortly after. In all that time, I never thought twice about where I go, what I do, or who I do it with. 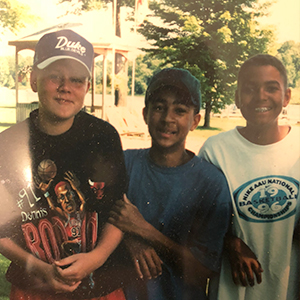 Drew Black with his long-time best friend and cousin.

I also haven’t given much thought to how or why opportunities have made themselves available to me, not just growing up, but throughout my life. I certainly have never had much anxiety of being routinely pulled over for a minor traffic violation. I figured it’d be the same for my friend.

After all, he went to one of Indianapolis’ most exclusive private high schools, graduated from Miami University of Ohio, DePaul Law School, worked on Capitol Hill and now holds an important post in Washington D.C with international responsibilities.

But on that day last year with my best friend, there was a difference—he was a man of color and I was not.

I’ve played this situation back in my mind over and over again since then. I grew up in a wonderful household with a diverse family. I considered myself ‘color-blind’ because to me, having family, friends, neighbors, or colleagues of color was just a normal thing—it made no difference. People were people. It wasn’t until the summer of my 35th year of life, riding back from a trip with my best friend, that I realized my understanding of the situation was not only shortsighted, but myopic and out of touch. Seeing my friend, with an accomplished professional pedigree far superior to mine, become anxious not due to his actions but only by the color of his skin, in 2017, was an incredibly potent wakeup call for me.

As a community investment officer at CICF, an important part of my job is remaining current on research and data that helps inform our service to the Central Indiana community. That research has provided more than enough evidence to identify that racial disparities between myself and men and women of color certainly isn’t limited to a general feeling of well-being. In the past year, countless reports have been produced identifying significant chasms between outcomes for majority and minority populations that show expansive differences in upward economic mobility, wealth, educational attainment, employment, and incarceration.

One of the most recent reports, The Equality of Opportunity Project, shows the disproportionate impact that race plays in economic mobility. The research shows that:

What does this mean? Even when black boys grow up in good conditions shown to improve outcomes later in life (low-poverty, quality education, two-parent households), their gains are still substantially lower in adulthood. This has led to income disparities between races across generations.

And the statistics aren’t much better for black boys in Indiana. According to the Indiana Commission on Social Status of Black Males:

What is most striking about this research is that, when looking at the environmental factors likely responsible for these outcomes, income inequality between blacks and whites is driven nearly entirely by what is happening specifically to black boys and men. While black women perform at rates comparable to white women, black men see perhaps worse outcomes than any other demographic group in America. In looking at the very few geographic areas where black boys were able to do as well as their white peers, the common thread is that they faced less discrimination and racial bias in those communities. Another major factor identified by the study was whether or not father figures were present within their neighborhoods—which 66 percent of all black boys living in poverty do not have. These same boys are more likely to be disciplined in school or incarcerated late in life. Essentially, what began as a challenging situation is compounded by discrimination and bias that is potent enough to throw an entire American demographic group off track and into debilitating hardship. 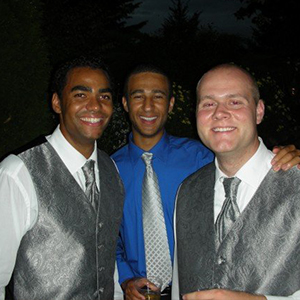 While there is no silver bullet to combat widespread stereotyping and racial bias, there are interventions that our community can adopt to begin moving in the right direction. We can empower and support comprehensive programs for black boys, make efforts to reduce racial bias, push to reduce discrimination in our school and criminal justice systems, and seek opportunities to create cohesive connections across racial lines—to name a few.

Our city is blessed with many social sector leaders that work tirelessly every day to address these disparities. While I’m only one person and am still learning, I can pledge to make my best effort as a community investment officer at CICF to become a committed ally working to be part of the solution.

I am no longer “color-blind.” Looking back to that day with my friend in the car and considering the vast research on racial inequity, I’ve learned that to be “color-blind means refusing to see the many race-driven inequities present in American culture. To say that I am colorblind would be not only ignorant, but unjust.

Thanks Drew for helping open eyes to a better way of looking at reality of life experienced by people. I count my self – still learning, Suzie

Drew, thanks so much for sharing this moving story and perspective.

Well said, drew. Thank you for sharing this story and your eXperience.

Not at all suprised by your experience. Some are enlightened, others are still clueless and for me ITS reality. Raising two blacks boys in a society of PEOPLE that hate them without knowing them is my reality. So I CONTINUE to educate them and pray they are safe.

Thank you for sharing this experience and for your thoughts. As someone not of color and with an experience so far removed from what so many of color experience daily, I sincerely appreciate learning and having my eyes opened to other realities and taking opportunities to educate, grow, improve, and make a positive impact in my own way, in my own little corner of the universe. Thank you again!

Drew – thanks for sharing.

Very well written, Drew. Thank you for Sharing. This is an excelLent piece of writing and a wonderful reminder to all of us that we don’t all have common experiences, even in close proximity or similar circumstances.

nicely done, drew. your personal story along with alarming statistics that only seem to be getting worse, provide a compelling call for self and systems examination and change. proud to call you a colleague.

Thank you for sharing your experience and those dramatic statistics.