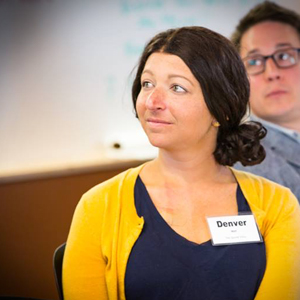 Tom Hanley is a passionate champion of Indianapolis, Founder and Executive Director for Nine13sports, President of the Denver Hutt Legacy Foundation, and often writes and speaks on young professional development and social entrepreneurship.

The Denver Hutt Legacy Foundation was formed in the weeks after the death of young entrepreneurial leader Denver Hutt to continue her legacy and vision of striving to make Indianapolis an even better city. Denver, who was only 28 when she passed away, never rested on past successes, and instead, always focused on the next great idea that would redefine community, industry, or placemaking.

When the Ben Franklin Funds initiative was launched by the Central Indiana Community Foundation in March, I recognized it as a concept that Denver would have not only fully supported, but would have immediately donated to the effort to help champion the future of Central Indiana. Denver’s belief was that Indianapolis was an already great city that could be even greater. She championed this vision through her time as the first Executive Director at the Speak Easy helping entrepreneurs find their footing and turn vision into reality; and in her short tenure at MIBOR in her role as the Economic and Community Development Liaison playing a role in helping represent communities and positioning them for further growth. She strived to “help cool people do cool things” and be a resource for the community.

While programs like this are not the core focus of the Denver Hutt Legacy Foundation, a few quick phone calls with my peers within the Foundation and the Hutt family confirmed that we were all in agreement as to the impact this program will make. In coordination with CICF and its leadership, the Denver Hutt Legacy Foundation made a $1,000 contribution to the Ben Franklin Funds program in April; insuring Denver’s name as one of one hundred individuals to make such a contribution and designating a small living legacy for her by including her in the time capsule that will be opened in 2116 as part of the history of Indianapolis.

The future impact of the Ben Franklin Funds program is insurmountable and the fact it is being run by CICF, the stewards of impactful giving in our community, only reinforces the ultimate positive change that this program and the gifts it receives are going to be able to make a century from now. Furthermore, it’s important to realize that while we will not see the impact of this program in our lifetime, it will cement a legacy for our entire generation.

Denver’s favorite motto was “if not now, when?” and I can’t think of a better way to champion Indianapolis than by supporting a program like this in her honor and legacy.

Denver had immense respect for the vision and mission of the CICF and Brian Payne, its President & CEO. She spoke on stage with Ben Franklin Funds Creative Producer Mail Jeffers back in October about community engagement and relationships.  She lived and breathed Indianapolis and is a role model we want our youth to aspire to be. In summary, Denver was the perfect example of the impact we all can make in Indianapolis and she did it unselfishly and without thinking about personal gain.

We collectively, as a young professional community, must help push the Ben Franklin Funds program forward. With the giving options of $100 or $1,000, there is a level for everyone. This is a great way to get engaged and involved as a first time philanthropist and know that you are helping shape Indianapolis for many years to come. Please consider giving today and making your mark on the community we know and love.